Thunder in the Desert 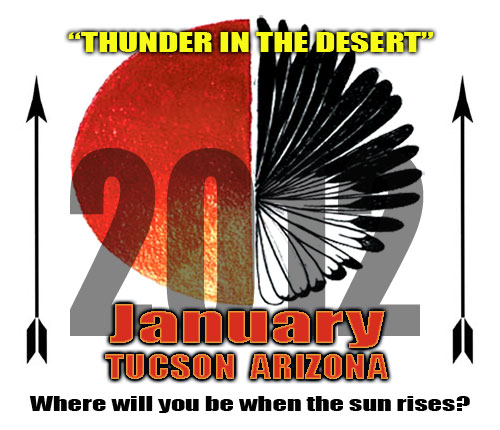 >> This Sacred Event has been Completed <<

This event is discontinued until further notice.

This was the question asked by the indigenous people of the world to mark their entrance into the 21st Century for their children. With only the promise of a place to stay and one good meal a day, over 187 tribal nations responded and gathered in Tucson, Arizona to greet the rising sun. They came from Australia, Mexico, Bolivia, Honduras, Panama, Alaska, Canada and the United States. It was a globally doomed Y2K year with no corporate sponsor, still they came for ten days to share their songs, foods, dances and crafts in an epic event called "Thunder in the Desert". It became the world's largest Native American media covered event as part of ABC Peter Jennings' live coverage of the sun-rising in each time zone seen by three quarters of a billion people world-wide. Peter Jennings expressed to his audience that only among indigenous people do we see man holding hands with other men to bring in the New Millennium during our midnight friendship round dance. The elders and the indigenous communities have asked for it to be repeated an additional three times to fulfill the sacredness of the number four. The all-volunteer committee has committed to complete this request with the final event in 2012.

It is an honor for the committee to invite all indigenous cultures of the world to return and again share their unique cultural expressions with indigenous peoples of other tribes. A formal request for participation by dance groups, musicians, poetic and literary artists, pow-wow folks, war mothers and veteran's societies, seventh generation youth and golden age groups, tribal tourism, art and craft vendors and tribal commercial exhibits, sponsors and volunteers are welcomed. We also send out an invitation to all four directions of the world to invite the four races of mankind, the red, the yellow, the black and the white to participate, share, experience and taste this unique event of ten thousand years of cultures, one hundred-eight seven tribal nations, 10 days all at one location - Tucson, Arizona, USA. To be held on December 30, 2011 through January 8, 2012. "Thunder in the Desert 2012" will feature parades,birds of prey, equestrian events, pow-wows, concerts, midnight friendship dance, elder's, veterans', children's and world indigenous people's exhibition days and a lot more.

A re-commitment will be made to the continuation of the strength, beauty and endurance of our traditions and cultures by providing a platform of inspiration for our Native American Indian Youth, as they continue into the 21st Century. Following the request of our elders, traditional teachings of our ancestors, and the needs of our seventh generation youth, we will showcase the strength, beauty and endurance of our spirituality, traditions and cultures. The People will come together in celebration of our continued existence throughout the past millennium. The all volunteer committees and it's sponsoring non-profit group Reservation Creations Women's Circle Charitable Trust and the National Native America Cooperative and North America Indian Information and Trade Center is dedicated to providing an enjoyable, educational and inspiring experience from an indigenous point of view. We welcome everyone to join us and again we ask,

"WHERE WILL YOU BE WHEN THE SUN RISES?"